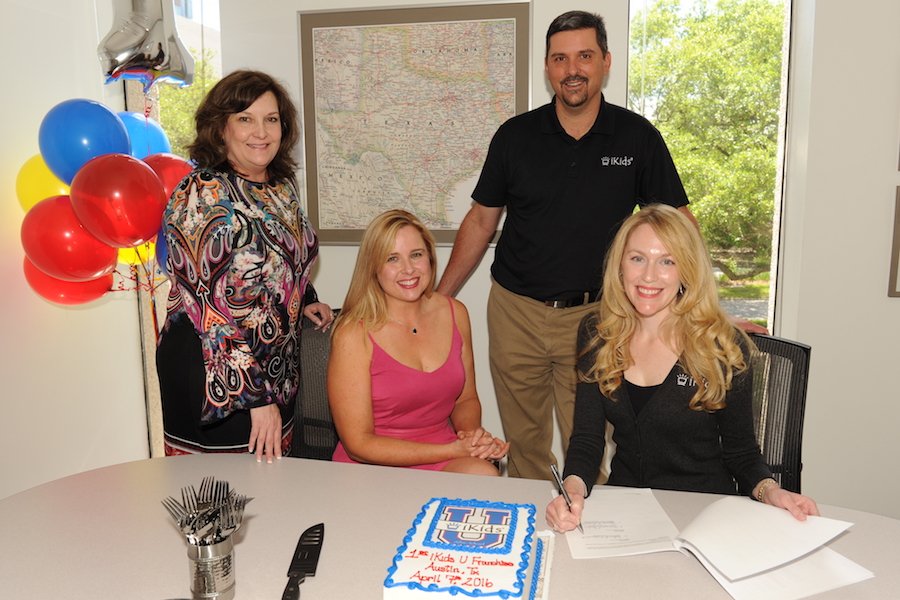 Today, we sat down with our newest franchise owners, Merrie Seiler and Rolinda Lankes. They’re the proud owners of a new territory in Austin, Texas, which also includes the suburbs of Round Rock, Cedar Park, Leander, Pflugerville, Lago Vista and Lakeway.

Merrie: For the past few years, I’ve been substitute teaching for the Round Rock Independent School District. I was teaching elementary and middle school classes — kindergarten through fifth grade.

I have an undergraduate degree in marketing from Texas A&M. I also have an MBA in General Business from Tarleton State University in Stephensville, Texas. My husband and I have been in Round Rock since 2000.

Rolinda: I’ve been teaching elementary school for the past 18 years. I taught in San Antonio, Round Rock and Leander. I’ve taught almost every elementary grade. My degree is from UT-San Antonio and my specialization is in microbiology.

What attracted you to this particular industry?

Merrie: I love working with children and, being a substitute teacher, this is something I really enjoyed. Autumn, the founder of iKids, is my sister-in-law. When she talked about this a couple years ago, I told her that, when the time was right, I wanted to be her first franchisee. Here I am!

When I told Rolinda about this opportunity, she said that we had to do this. Our husbands are business partners too — they own a civil engineering firm, Seiler Lankes Group.

Rolinda: iKids provides a lot of things that I would have loved for my kids. It has things that parents were telling me they were looking for during parent-teacher conferences. One-on-one tutoring, music classes, robotics courses — so many things. When I heard about what Autumn was doing with iKids in Houston, it made a lot of sense.

Why did you decide to invest in iKids?

Merrie: I know that parents are looking for quality after-school programs. When we looked into iKids deeply and saw all the things it offers, we realized it was an extremely appealing concept to invest in. As a parent, the iKids model makes so much sense.

We operate in schools so parents don’t have to worry about transporting kids to another provider. This offers a lot of peace of mind for parents.

iKids is also structured to take the burden off of administrators at the schools.

We take on that whole role of offering all classes, enrichment and everything they need. We’re partnering with the school and serving as a one-stop shop.

Rolinda: I just didn’t see any other programs out there that were all-encompassing and provided this for children. It doesn’t have to be the exact same thing every other kid is doing. There is a lot of fun and friendships that can be built through the activities taking place.

In general, it had more components than I saw in other programs that provided just one thing. Part of what makes iKids unique is that it is completely customizable from one student to the next.

I absolutely love our mission: Taking after-school to the next level. We offer kids a creative release — iKids offers a community where they can express themselves in different ways.

What makes you most excited about being a franchise owner?

Merrie: It’s so exciting to be in charge of our own business. It’s exciting to know that you’re going to reach your goals. I love the idea of having something that’s mine — that it can be successful because of my direct efforts. I’m so thankful for this opportunity.

Rolinda: I’m really looking forward to being able to run a business alongside my business partner, Merrie, with the help of the iKids support team. We’ll be able to make our own business decisions and have the chance to have such a positive impact on the lives of so many kids. This is another form of being able to do that.

What are the next steps for you?

Merrie: We’re hoping to start working in a few schools in Austin and then move into Round Rock. We want to ultimately expand into as many schools as the future would allow.

Rolinda: We’ve been going through vendor approvals and meeting with administration at various schools. We’re excited to be moving toward being in schools at the beginning of the upcoming school year.

4 Reasons to Own an iKids U STEM Franchise

A STEM after school franchise will directly impact how children learn. Becoming a STEM franchise…

Autumn Seiler, president and co-founder for iKids Inc., has spent her entire life around children,…